At our E-Auction 8 – Stefan Batory’s coinage

Published by rzeszowskidom on September 6, 2021

Once upon a time, there was nothing about Stefan Batory’s coinage, and there are still a few interesting items worth mentioning. First of all, about the exquisite Riga grosz from 1581 with two shields. Rare, early type from the Riga mint, with the shields of Poland and Lithuania and the full date at the bottom – on the reverse. Later, these shields were replaced with the large coat of arms of Riga. Punctuation variant with circles on the obverse and rosettes on the reverse. An exquisite, carefully selected mint specimen, with a charming patina. The highest, among the so far issued, NGC grading score for the grosz of Riga, Stefan Batory. The only specimen in the year 1581 so highly appreciated! In such condition, it is practically unavailable on the collector’s market.

Another very interesting item is the coin minted in Olkusz in 1579. The first type of King Stefan Batory’s crown grosz coins. Issue with a narrow portrait of the king on the obverse, on the reverse an eagle with the king’s family coat of arms, instead of the shields of the
Polish-Lithuanian Commonwealth. Most of the Olkusz coins from 1578-1580 are in very poor condition. It was related to the non-compliance with the monetary rate regulations by Rafał Leszczyński. The specimen from the upcoming auction has a slight central defect – quite characteristic of this issue, yet in our opinion it is one of the most beautifully preserved Olkusz grosz coins of Stefan Batory on the numismatic market. Recommendable for the best collections!

The offer also includes a very interesting Olkusz trojak from 1586. The rarest spelling variation of a trojak from 1586 – NH ligature at the end of the obverse legend.
Punctuation variant:
– on the obverse, the dot starts the legend, no dot in front of the REX
– on the reverse, a dot after the ARG.

A beautiful, mint-colored specimen, glossy all over.
The coin recognized as the second highest among the so far awarded in the NGC grading.
At the moment, only one copy has been rated higher! 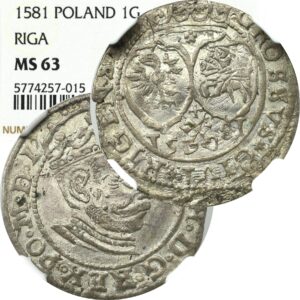 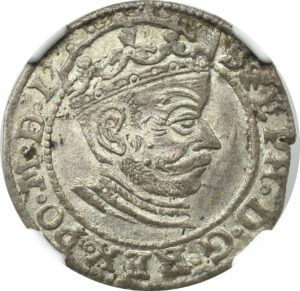 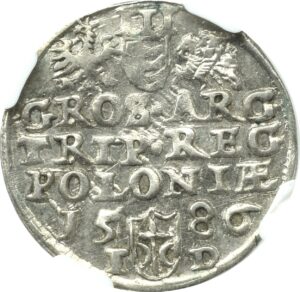 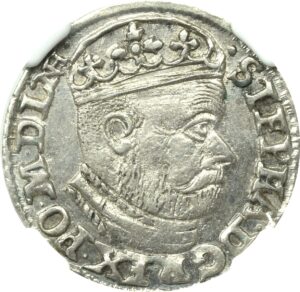 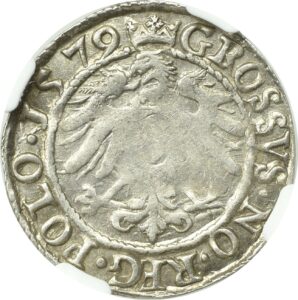 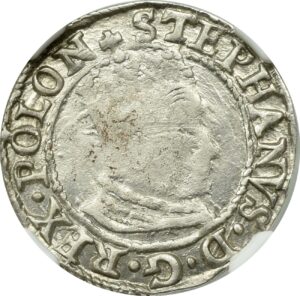 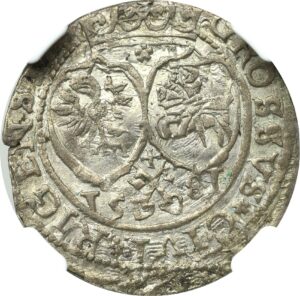