Published by rzeszowskidom on March 16, 2022

Podskarbiówka coin, otherwise known as jeton in Europe, got their name thanks to their use, most often in sub-treasury offices.

What were the jetons basically? Small items that helped with counting. Jetons did not have a denomination, but were a kind of abacus that helped in the calculation of larger numbers. At the beginning, the counters were imported to Poland from abroad, and their production center was located in Nuremberg, where the institute operated for almost 300 years!

The first Polish jetons were minted in 1550. There are 60 known Polish and Lithuanian jetons, and most of them are extremely difficult to obtain. For normal work, between 60 and 100 jetons were needed! From the second half of the 17th century, they were brought back from abroad.

Most of the Polish jetons are beautiful, ornamented items, but mostly in average condition due to their everyday usability. They were most often made in the form of copper, brass or bronze (rarely silver) tokens minted by a mint.

In our offer, we are pleased to offer you a very well-preserved specimen, known from two pieces of the jeton made in Malbork by Kasper Goebel and Gracjan Gonzalo for Jan Firlej – the Great Crown Treasurer.

It is a very rare jeton due to the breakout in silver. In the specialized catalog of Drożdż, information about only one known specimen is mentioned, which is in the National Museum in Krakow – in the Emeryk Hitten-Czapski museum coming from his collection. So it is probably the second known and the only specimen on the private market that you will have the opportunity to include in the collection soon, on April 9!

Obverse: Lewart in a wreath, along a pearl edge, along a rope edge legend:

Reverse: a palm tree with a pearl edge, and a legend beginning with mint marks along the string •NITITVR:SVB:ONERE:VIRTVS•1593: 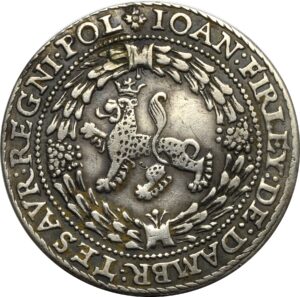 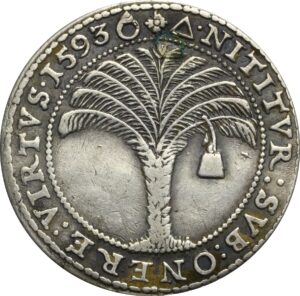