Published by rzeszowskidom on March 13, 2022

The beginnings of the Duchy of Oświęcim date back to 1315, which was established after the division of the Duchy of Cieszyn. 12 years later, the prince of Oświęcim, Jan Scholastyk, paid tribute to Jan Luxemburg, becoming a vassal of the Czech Crown.

In 1445, the principality was divided, in which the Zator lands fell under the rule of Wenceslaus I. In 1454, John IV paid tribute to the Polish king Kzimierz Jagiellończyk, and less than 3 years later he sold his kingdom to him for 50,000 x 60 of Prague grosz. The purchase comprised 2 cities (Oświęcim and Kęty), 2 castles (in Oświęcim and the Wołek castle), and 45 villages.

After the First Partition of Poland in 1772, the territory of the former Duchy of Oświęcim fell to the Austrian Monarchy, becoming part of the lands abbreviated as Galicia.

The official name after the 3rd partition of Poland was as follows: the Kingdom of Galicia and Lodomeria together with the Grand Duchy of Kraków and the Principalities of Oświęcim and Zator.

You are probably wondering what the purpose of presenting this period on our profile is? Well, at the IX auction there was a coin that is extremely rare in this condition, and in our opinion it is one of the most beautiful pieces available on the market. We are talking about 30 cutters from 1775 with the image of Maria Theresa. 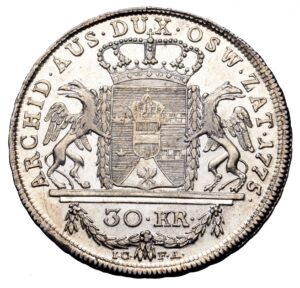 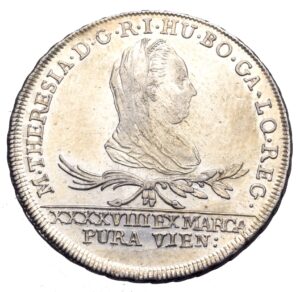