Today’s post is dedicated to collectors of copper coins, with an emphasis on the coinage of Augustus III of Poland.

King August, after the start of his rule, refrained from minting in the years 1734-1749, and then began to illegally mint coins for the Polish foot in the Saxon mints in Gubin and Grunthal on a massive scale. The activity began with the minting of a small coin very similar in size to boratins, i.e. szeląg coins. In 1752, grosz coins were minted to facilitate currency trading.
This activity was connected with many abuses, which were caught in 1755 by the leader of the opposition, August Czartoryski, on whose order the szeląg coins were examined, which turned out to be only half their value. Bans on accepting coins were introduced among Czartoryski’s people, and even the then Primate of Poland, the later interrex of 1763 Władysław Łubieński, joined the strike, calling the coins ‘a misfortune worse than locusts, thunder and hail’.

The issue was stopped with the year 1755, while in the catalog ‘Our coin is similar to a pretty maiden. A small history of Polish money ‘, in the study by Borys Paszkiewicz on page 148, there was a suggestion that the tested items, commissioned by August Czartoryski, could be Prussian forgeries.

Later years are marked by the minting of excellent silver and gold coins, which we hope will have an opportunity to mention a bit. Despite the relatively short minting times, they were carefully designed. They showed a bust of the king in a wig on one side and a split
Polish-Lithuanian cartouche on the other, and the king presented his Polish and Saxon titles, without the Lithuanian one. Over time, the external quality of szeląg coins has deteriorated, and their size has also decreased. In the book ‘History of money in the Polish lands’ we can read that about 50 million grosz coins and 100 million szeląg coins were minted, but to this day it is not known how many of them actually survived.

We are sure of one thing – there are not many coins on the market and they are extremely sought after. The copy from the upcoming auction is characterized by excellent minting quality, a beautiful, natural, brown color with a natural patina and no traces of circulation, thanks to which NGC awarded the coin the MS61 rating. In the NGC registry, we can see that only two coins have been rated higher (as of today), while there is only one coin in the MS61.

The auction starts in 40 days, meanwhile, have a nice day! 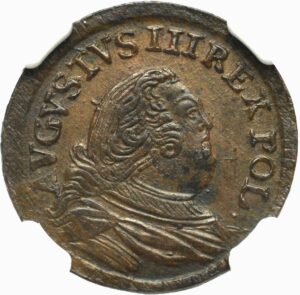 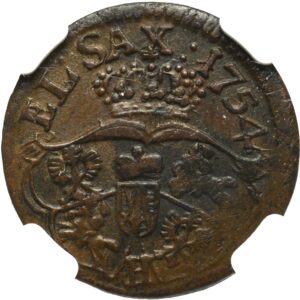