At our Auction 8 – Obol coins

Obol coins, often called half-money in the era, are intriguing, rare and extremely sought after by collectors not only of the coinage of Sigismund II Augustus, but also of small coins of Royal Poland or Lithuanian coinage.

But let’s go back to the genesis of the nomenclature and answer the question why people called it half-money? After all, finding the perfect specimen of this coin is now almost a miracle, and only a few people have this coin in the collection at all.

Obolos is the word that gave rise to the later obol, i.e. a metal rod, belonging to the archaic wafers. In early Europe, it was also known as a fine, equally sought after and eagerly included in collections by collectors.

However, let’s focus on the use of this means of payment in Poland. In the 16th century, a major problem in the economy was the inflow of poor-quality money from Silesia in the form of Świdnica half-grosz coins, which reduced the coinage profit of the current monarch and caused large-scale coin inflation. In Poland, there was even a ban on accepting this coin (unfortunately ineffective), but the ban did not apply to Prussia or Lithuania. Another step towards limiting the influence of money on Polish soil was the severance of trade relations with Silesia, and then redemption at the rate of 1 half-grosz for 5 denarii (a year later 8 denarii).

Most likely, obol coins were supposed to serve the purpose of redeeming half-grosz coins, because a single half-grosz of Świdnica was valued at 3½ denarii, i.e. 3 denarii and 1 obol.
In Lithuania, the problem with half-grosz coins was resolved only around 1546-1547 as part
of the action of punching them into Lithuanian money, that is, in the years in which obol coins was issued.

1 denarius was worth 2 obols, hence the name half-money.

In the iconography of Lithuanian coins, the significance of the Eagle, which was visible only on denarii and half-grosz coins, and on the multi-field dial of ducats and półkopek coins, which are extremely rare coins, was diminishing. On the other hand, the royal monogram of the intertwined letters SA under a closed crown played a significant role, and the importance of the Gedymin’s Columns coat of arms restored to coins by the previous ruler was also growing.
At obol coins, the columns were the main motive.

Gediminas columns are the historical emblem of Lithuania, the most famous next to Pogoń,
but they appeared much earlier, since the end of the 14th century. This coat of arms appeared on Lithuanian denarii, minted in the years 1413-1430.

The copy from the upcoming auction is characterized by perfectly preserved details for this type of coin and a relatively deep minting without major defects.

At the same time, we encourage you to visit our catalog on the Onebid platform regularly,
where we regularly add new items 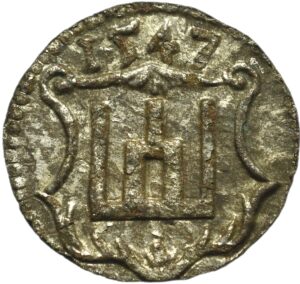 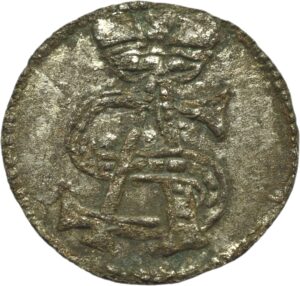