Published by rzeszowskidom on October 8, 2021

The year is 1627 and the last (sixteenth) emperor of the Ming Chongzhen dynasty sits on the throne in the Far East. Despite strenuous efforts to strengthen the rule of his family, he was effectively prevented by a peasant rebellion led by Li Zicheng in 1644, taking his place on the throne, which marked the beginning of the Shun dynasty. The rebel’s reign, however, lasted very shortly due to General Wu Sangui sent against him, who opened the Great Wall by bringing the Manchus, for which he was handsomely rewarded. However, history can be perverse and a few years later the general led the anti-Manchu rebellion.

You will ask what happened to Emperor Chongzhen. On the day rebel Li’s troops entered, he fled from the palace to Jingshan Park, where he ended his life…

As we can see, the history of Chinese dynasties is extremely interesting and dynamic, the coins from those areas are also interesting, and as a representative we want to present you the Dollar from 1899 with an unlisted variant of the number 29 in this shape. In addition, the coin
is in a very attractive condition, with impeccable detail and a very nice golden-brown patina.

Once again, the auction includes several delicious Chinese coins from the 19th and 20th centuries, as well as many other coins, which we invite you to read on a regular basis

We remind you that we work on an open catalog, which allows you to view the added items immediately, without having to wait for the catalog to be unveiled.

We wish you a nice weekend! 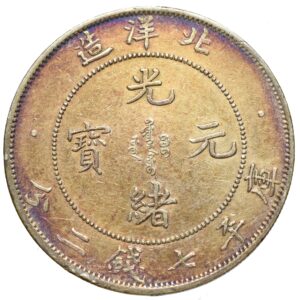 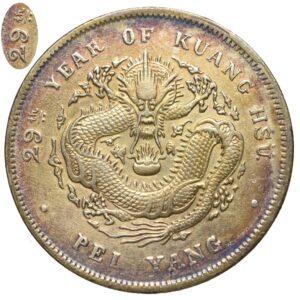