At our Auction 7 – thaler of Augustus III

This afternoon and a long evening, over coffee and cake, it is mandatory to spend with the king, who became famous for his love of feasting 😉

A ruler who was unlucky and remembered as the personification of all that is evil and vain,
but if we replaced him with anyone else, there would be no chance that he would recover anything more from the failing and corrupt state – of course it can be said that the fish spoils from the head, but at that time, it is difficult to say whether this fish had one head at all.
In any case, we invite you to the feast. Today just for the eye, with the coinage plates from the last year of the reign of King Augustus III, which will be offered at the 7th RDA auction in April.

The impressive thaler, the obverse of which shows the bust of August III in armor, this thaler
as a representative of the Saxon-Polish coins shows Augustus using the names of
Frederick Augustus and the royal title, but the bust is shown without a crown.

The reverse of the coin shows crowned ornate shields with Polish, Lithuanian and Saxon coats of arms, below them F W ô F being the initials of the Dresden mint master,
Frederick William ô Feral, and an inscription X. EINE FEINE MARCK.

An excellent specimen appreciated by one of the higher marks by NGC – MS62, where only 3
of those assessed received a higher one. In our opinion, the most beautiful reverse of August III’s thalers, which impresses with the amount of details and the general composition at a truly masterful level, clearly standing out from the other types of the greatest coin of this ruler.

We invite you to cooperate and contact us – we will quote and advise you free of charge on the best form of sale or reorganization of the collection. 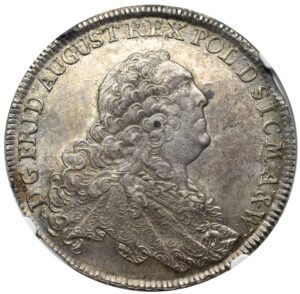 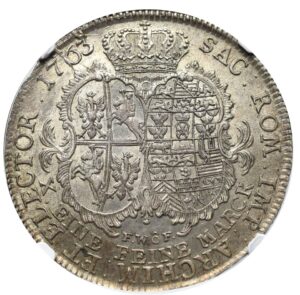 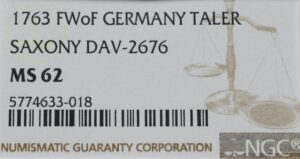