Published by rzeszowskidom on March 7, 2021

Most collectors of royal Polish coins know what the vicar coins associated with Polish territories look like. In the history of our country, we can distinguish coins of this type among two rulers – Augustus II the Strong and Augustus III of Poland.

But let’s start from the beginning and answer the question where did the name of the vicar coins come from. It is a very simplified name of an issue derived from the office established
in 1356 under the Golden Bull of Emperor Charles IV, and the full name of such a function is the Vicar of the Holy Roman Empire or, for short, the Vicar of the Reich.
The task of such a person was to fulfill the functions of the interrex, that is, all the functions
of the monarch on his behalf. Such situations could occur when the monarch was underage, very sick or simply absent from the country, and in the case of an interregnum. There were two electors in the German Reich – one Saxon palatine, whose task was to manage the territories
of Saxony, Westphalia and the rest in the north of the country, while the other one, the Rhenish palatine ruled the territories of Franconia, Swabia, Rhineland and the rest in the south of the empire. Of course, history was full of wars for governance, but maybe we’ll write about that another time 😊

Returning to the Polish Vicars, it can definitely be said that their issues are beautiful coins that enjoy great interest. The vicariate coinage of Augustus the Strong focused on the issue of 1/8 thaler, 1/4 thaler, thaler, thaler and ducat after the death of Emperor Joseph I, after which he took over the function of the vicar of the Reich. We are pleased to offer you a beautiful thaler at the upcoming auction, and you can find photos of this coin below 😊

Fryderyk August’s coinage, when it comes to vicariate issues, was much more extensive
and contained many smaller issues. When it comes to the richness of details and the beautiful design of the stamp, they are definitely one of the most interesting coins of the early 18th century in Europe at that time. We distinguish grosze from 1740 with a large two-headed eagle on the reverse and the bust of the ruler facing right, grosze 1741 with the reverse, on which
we can see a majestic throne on a platform, at the top of which stands a majestic two-headed eagle, interestingly the throne is empty, which may indicate an interregnum, while Augustus himself is shown on horseback, which is probably meant to emphasize his chiefly commanding character. The pennies from 1745 are already very polished, on the obverse there is a slightly smaller drawing, but better designed with attention to every detail, while on the reverse there is a single-headed eagle with a sword. The rest of the issue, i.e. ducats, half-thalers, thalers and ducats, are identical to the penny from 1741, differing only in size, weight and, in the case of ducats, in material of manufacture. Below we present all Fryderyk’s issues.

It is a relatively small section of the Polish coinage, but it is definitely worth attention
and inclusion in the collection due to the beauty of the issue and the extremely interesting history of the office of the Vicars of the Holy Roman Empire. 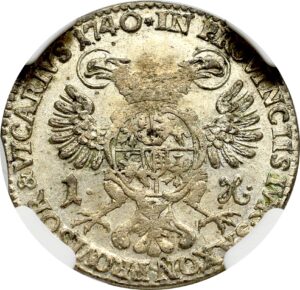 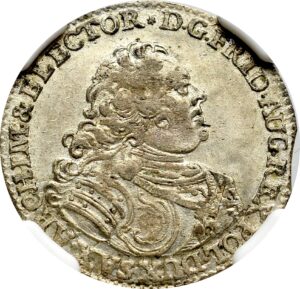 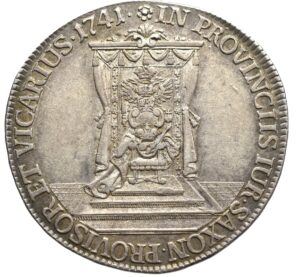 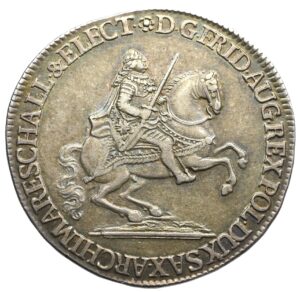 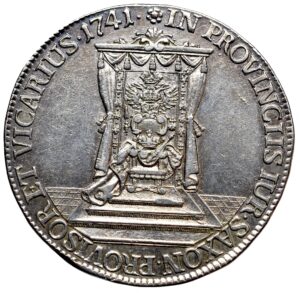 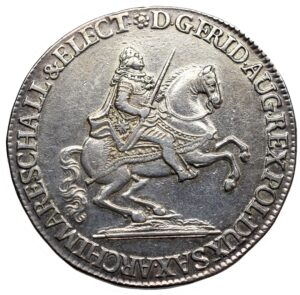 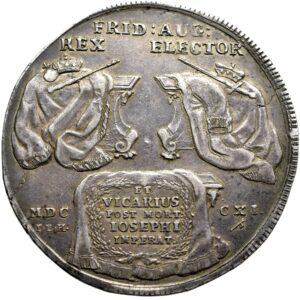 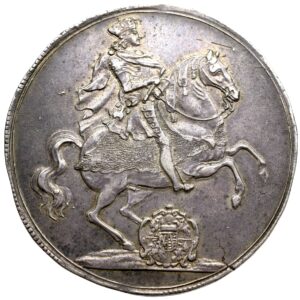