At our E-Auction 4 – a very rare szóstak coin

For a good start of the week, we present our ace up the sleeve, which is a pride of the upcoming event and at the same time one of the most interesting szóstak coins that will be auctioned at all autumn auctions … 💪

A very rare item absent from most collections.

Position sought in any state of conservation. Here is a well-presented specimen,
slightly damaged, with a cut running through the missing piece of the rim.

Obverse: the bust of the king with a crown, armor and ruff facing the right, separated by an inner rope rim, along the outer rim a legend:
SIGIS•3•D G•REX•POLO•M•D•LITx;

Reverse: at the top of the field the coats of arms of the Crown, Vasa and the Grand Duchy of Lithuania, above them the symbol of the V-I face value, separated by a crown; a legend in 3 lines under the coats of arms:
GROS.ARGE/SEXD REGN/POLONIAEx, below the date 15-x-95 separated by the sign of Herman Rudiger’s rose, the Lewart coat of arms of the Grand Treasurer of the Crown Jan Firlej and the sign of Andrzej Lauffert’s grate; below, separated by a shield with the Lewart coat of arms, the initials of Podskarbi xI-Fx.

In less than a week, it will change its owner – we wish you good luck and we guarantee that emotions will be at its peak.

We invite you from September 28 on https://rda.onebid.pl/pl/index 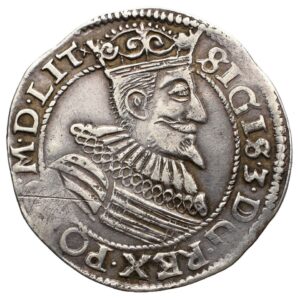 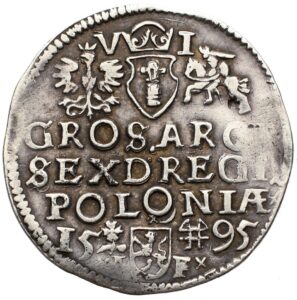