Medieval coins are gaining more and more popularity every year. At our next auction, we are pleased to offer you over a dozen interesting and very rare coins.

Among the coins that we want to present to you today is the denarius without the date of Bolesław Krzywousty, still as a Silesian prince from the mint in Wrocław with the SI monogram. The estimated date of issue is between 1097 and 1107. On the obverse we can see the incorrectly spelled inscription BOL • EXSLAVS, and on the reverse there is the head of Saint John directly in the line border with the inscription + S IOHANNES on the reverse •

The coin was minted in a manner typical for this issue – too small in relation to the stamp, with a slight shift, which is why it is partially missing. Nevertheless, a copy of above-average appearance, definitely rarely found with such well-preserved detail.

There will also be a mint copy of the denarius of Bolesław Kędzierzawy, the obverse of which we see the figure of the prince in majesty, holding a sword, along the rim a legend going counterclockwise with the legend • BOL [] AVS •, and on the reverse of the rectangular frame, the head straight ahead, the legend along the rim : ADALBER SCS

Strończyński does not describe this variant of the legend, the coin is struck on a thin sheet metal, which makes the drawing of the reliquary visible on the obverse.

A typologically interesting copy from Rozbać Dzielnicowy can be observed on a bracteate with a bishop with a crosier to the right. Emission attributed to Leszek Biały despite the legend pointing to Kazimierz. According to prof. Suchodolski, this procedure was aimed at legitimizing Leszek’s authority in the Krakow district as the heir of his father, Kazimierz the Just. A beautiful copy of a rare issue known from the treasure of Krakow with minimal defects in the collar in the golden patina.

One of the most characteristic emissions is bracteate with a knight holding a gonfanon in one hand – an attribute of statehood, and in the other a cross – a symbol of Christianity. Emission attributed to Kujawy, most likely modeled on the issue of the Teutonic Order, but iconographically different.

From the district Poland, we will also offer a denarius, which is assigned to Leszek the White, and the obverse representation shows St. Stephen. Under a three-arcade arch topped with towers, there is a figure of a man holding a palm branch, behind him in a field 4 stones. On the sides of the middle tower, two spheres. Brakteat from the “AZIMIR” group known for the treasure from Krakow, in an excellent, near-mint condition.

Bracteate with undefined attribution will also appear from the same period. The motif is interpreted as a bird walking to the left with representations in the fields, but without the wings marked. A nice copy with a slight crack in the sheet metal.

As the last coin, today we would like to present you the bracteate of Władysław Łokietek, very characteristic with an eagle with outstretched wings with 3 feathers, striding to the left. Coin with a crack in the collar, with a nicely preserved patina detail. 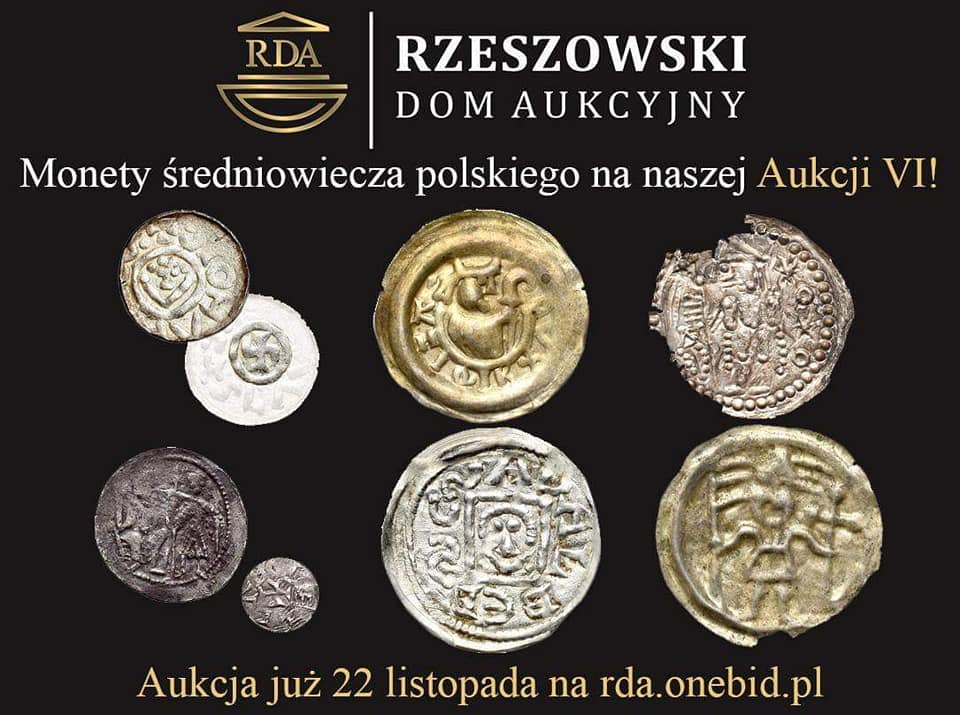 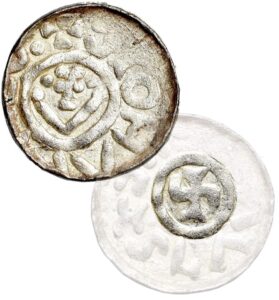 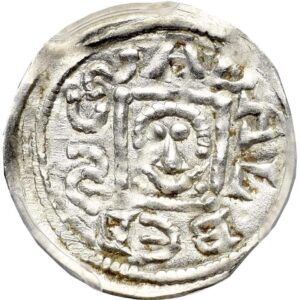 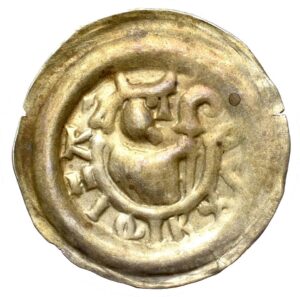 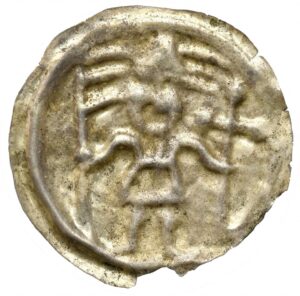 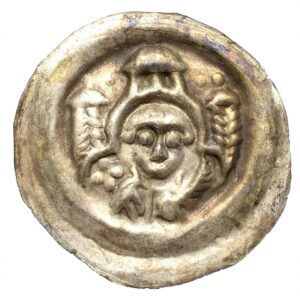 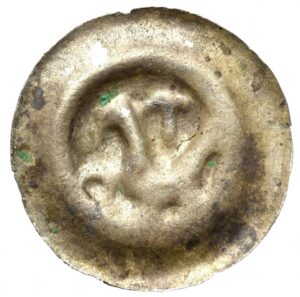 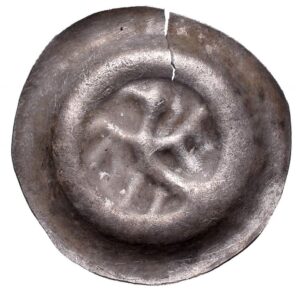