Published by rzeszowskidom on November 7, 2021

We will spend this morning with two Sigismund III Vasa thalers from 1628 and 1632.

Thalers are coins that many collectors dream about, both beginners and advanced. Collecting them for varieties, however, requires a lot of money and time to find the right specimens, which are rare on the market.

At the upcoming event, you will have the opportunity to supplement your collection with two beautiful specimens – the first one very nicely minted, with well-preserved details and a lot of mint gloss in the background from 1628, and the second, with a different bust, from the year of the death of Sigismund III Vasa. The coin from 1632 is an around-the-clock copy in a dark patina, appreciated by the highest, among the so far awarded, NGC grade for all Bydgoszcz thalers from this year. The last year of Sigismund III Vasa’s thalers, probably minted in a limited edition in the first quarter of 1632 (Sigismund III died on April 30, 1632).

Returning to the first coin, we would like to show why they are very interesting not only from a collector’s point of view, but also from a historical point of view. Here is a fragment of the description from the upcoming auction:

“Sigismund’s thalers are excellent material for research on Latin abbreviations in numismatic epigraphy of the modern period, due to the fact that the full royal titles were included.

Obverse: along the pearl edge, a royal torso in a four-bow crown, with cross-shaped fleurons, 5 jewels in the shape of crosses in an open rim, with 10 jewels on the bows, a mesh cap, topped with a royal apple; in a tubular ruff and armor, with a sash, armor with 7 crosses in the wing, with two rows of balls and a row of crosses in the shoulder plate, with the Order of the Golden Fleece suspended on a chain with 3 flints; holding a royal apple with two strips of cross-shaped gems in a 4 x 2 arrangement and a sword; right; along the outer rim is a legend separated by the coat of arms of Półkozic in a simple coat of arms:
SIGIS(mundus)•III•D(ei):G(ratia)•REX•POLO(niae):-M(agnus)•D(ux):LIT(huanie)•RVS(siae):PRVS(siae)•MA(soviae)+;

Reverse: crowned with a pearl ring, with a four-bow crown, with 5 cross-shaped fleurons, between which there are additional cross-shaped gems, with 9 cross-shaped gems in an open rim; a nine-field coat of arms with the coats of arms of the Crown, Grand Duchy of Lithuania, Sweden, Folkungów and the coat of arms of the Vasa Dynasty, with labras on the sides, surrounded by a chain of 12 flints, with the Order of the Golden Fleece; Jacob Jacobson’s initials I-I and the date 16-28 between the shield and the chain; along the outer rim a legend separated by the Order:
SAM(ogitiae)•LIV(oniaeque)•NEC•NO:SVE(corum)-GOT(horum)•VA(n)D(alorum):Q(ue)•H(ae)R(ed)I(tarius)•REX+;” 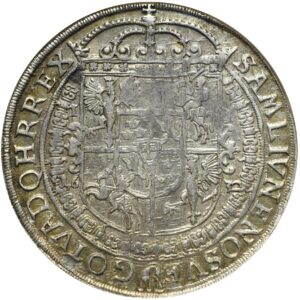 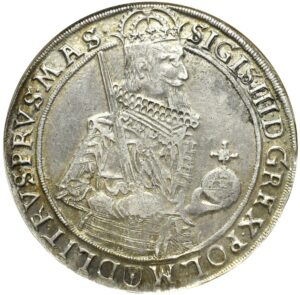 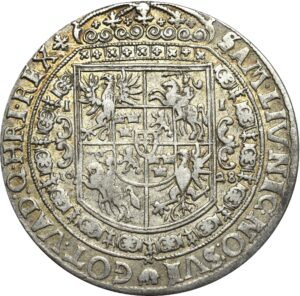 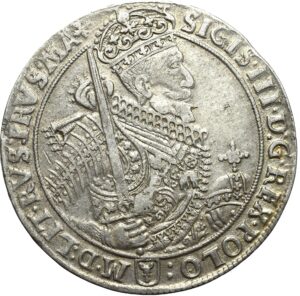