Published by rzeszowskidom on October 14, 2021

Now let’s focus on the item that appeared in our offer. The coin was appreciated the second highest, among the so far awarded, in the NGC grading, where only two copies were rated on the MS66! An exquisite, specimen specimen of the Lublin triple with a perfectly preserved mint gloss. Variety with the mint initial (“L”) on the left side of the Lewart coat of arms, with a type 39 bust according to D. Marzęta’s typology.

Obverse: a royal bust with a crown, armor and a cloak, with a tubular ruff seen from the side, facing right, along the rim legend:

Reverse: denomination of the face value III, underneath the coat of arms of the
Eagle – Crown of the Kingdom of Poland, Sheaf – of the Vasa and Pogoń dynasty – the Grand Duchy of Lithuania, below the legend in three lines GROS.ARG / TRI REG / POLONI, below the Lewart coat of arms in the shield, between the mint initial L and the abbreviation of the date 98.

Once again, a very interesting group of trojak coins will appear at the auction, including a large part in mint states of preservation! There will also be interesting and undescribed variants

We invite you to follow our profile on the Onebid platform, where we work on an open catalog, which gives you the opportunity to keep yourself informed about the upcoming offer 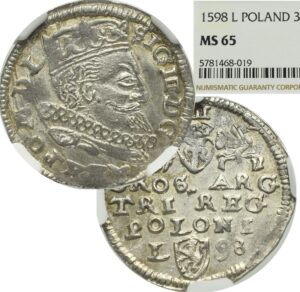