Some time ago, during the promotion of previous auctions, we wrote quite extensively on the history of the Courland areas. Today is the time to introduce one of the princes of Courland and Semigalia and the Count of the Holy Roman Empire, Duke of Zagan, who reigned at the end of the 18th century.

He spent his youth in Saint Petersburg, where his father advised Empress Anna Ivanovna.
After the intrigue of a certain minister, the whole family was exiled to Sibir, until Peter III took power, who after 22 years decided to rehabilitate the family and made the figure of today’s post, Piotr Biron, a general of the Russian cavalry. A year later he was appointed his father’s successor as the Duke of Courland, and therefore he had to pay tribute to Stanisław August Poniatowski.

He formally sat on the throne five years later in 1769, and immediately began to accumulate his fortune. He was the owner of many lands in Silesia and the Czech Republic, collected paintings and maintained a court band and theater.

When the partitions began, he remained militarily neutral, following the orders of Empress Catherine II. In 1791, it formally became subordinate to the Russian Empire, and after a few years it transferred the entire Duchy of Courland and Semigalia to Russia, receiving a life annuity of 60,000 thalers and a one-time compensation of 2 million thalers.

Interestingly, on the coin we can see the coats of arms of Poland and Lithuania in the crown and the bust of Piotr Biron. Unfortunately, he was not kind to the Commonwealth, or to his subjects, because he did not help the Polish king first, and then sold his country…

At the upcoming auction, we offer a thaler from 1780, which can be an interesting supplement to coins related to Polish areas, as well as to 18th-century coins. 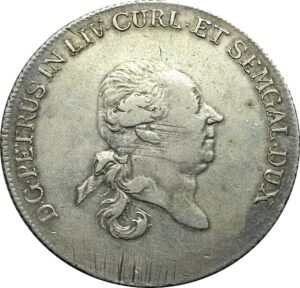 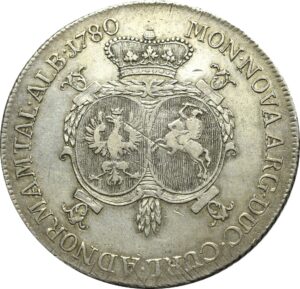