Published by rzeszowskidom on October 29, 2021

Are here any collectors from Sławno or its vicinity?

At the upcoming auction you will have the opportunity to supplement your collection with a coin of extreme rarity. The coin, thanks to which the early establishment of the Sławno-Słupsk principality, whose prince was Bogusław III Racibor, was proven.
How early? The position is dated to 1190, which makes it one of the earliest material evidence of the existence of the above-mentioned principality!

The numismatic item is extremely rare and is also an invaluable source for researching the history of material culture in medieval Pomerania.

It is one of the earliest West Pomeranian coins minted by Pomeranian dukes.
H. Dannenberg (1864, 1893) and Bahrfeldt explained SELAFI KASTRVM as the name of the town of Sławno, hence the question at the beginning of the post. Collectors from this area have a unique opportunity to obtain a coin from their native lands, which can be an interesting decoration of many collections!

Obverse: The bust of a man with a beard and mustache en face, with his hands in the gesture of an orant, a gothic legend around the rim.

Reverse: The three-tower structure supported by an arch. A centrally dominant tower with battlements, two lower ones sharply crowned on the sides, another smaller in the arch. In the rim, a partially legible Gothic inscription. 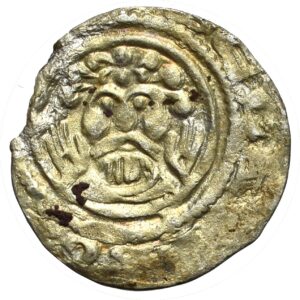 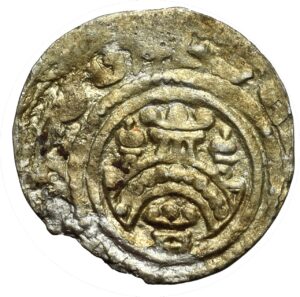