Published by rzeszowskidom on October 14, 2021

Christian IV was the king of Denmark and Norway at the age of 11! It is true that the Council of State ruled on his behalf, but at the age of 19 he ruled two kingdoms!

The ruler pursued an economic policy based on mercantilism, saying that wealth was associated with the possession of a large amount of precious metals, while he made several military mistakes, which caused Denmark to lose its dominant position in the Baltic countries. What were these mistakes? Among other things, the sinking of King Władysław IV’s fleet anchored in Gdańsk, and then the desire to support Poland militarily against Sweden. Indecisiveness and resignation from the planned alliance with the Polish king were quickly used by the Swedes, occupying large Danish territories. The king, of course, tried to regain the lost lands, but the battles were fierce and often it was associated with numerous losses.

Undoubtedly, this is another interesting character, and a few coins from the reign of this ruler will be on offer in the upcoming auction. The 1 mark from 1615 in its near-mint condition, in the variant with crossed swords in the legend of the reverse, denoting Johan Post, is definitely distinguished in terms of its state of preservation and rarity.

Without extending it, we wish you a nice and sunny Sunday! 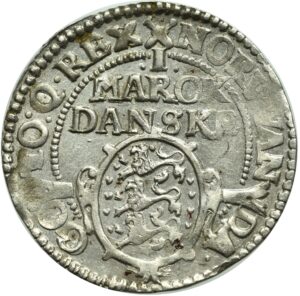 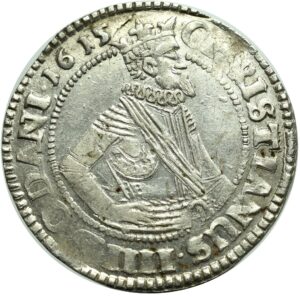