At our Auction 7 – golden ducat of Jan III Sobieski

Published by rzeszowskidom on March 14, 2021

Saturday is the day of gold

In order for the tradition to be fulfilled, we propose an extraordinary coin when it comes to curiosity for today’s after-dinner dessert!

Yesterday we showed the Gdańsk thaler. today we are staying in this city, but we will move several dozen years forward to 1677… It was this year that the coin of interest to us was minted in this city

We mean the ducat of the second year of minting this denomination in Gdańsk during the reign of Jan III Sobieski.

A characteristic issue from the mint under the direction of Daniel Lesse, with a portrait of the king in a mantle and a laurel wreath, and in a caracen, with a new design simplified compared
to the year 1676.

Interestingly, on the obverse stamp, the engraver originally made a mistake in the legend in the word AUREA, where he mistakenly omitted the letter R, under which E is visible.

The second curiosity is the performance itself – for years it has been common to call this type of bust a bust in antique armor, or in the antique style. However, this is not true! Of course,
we see a laurel wreath here, eagerly used by Jan III as a reference to Julius Caesar, but the armor itself is typically Polish karacena – the armor of hussars referring to the Sarmatian culture.

Here we see a fragment of a protruding gargoyle and 5 strips of material. This is a quite significant difference, as it facilitates the understanding of the elements of the iconography of Lev Lechistan coins. In this context, we can easily confirm that the cross under the bust,
which is often visible on the coins of this ruler, is a jewel of the Order of the Holy Spirit,
although usually no chain of orders is visible on it. An alternative explanation could be the cross from the breastplate of the royal caracen, but it could not be so low… that’s a curiosity

Another interesting fact is that this exact pair of stamps was used 5 years later in 1682 to mint the third year of Gdańsk ducats minted during Sobieski’s times.

Obverse: along the rim a cartouche with the city coat of arms supported by two lions, based on a heart-shaped console, topped with palm leaves and a standing twig, under the feet of the lions, the initials D-L by Daniel Lesse – a tenant of the mint in the years 1650-1685, along the outer rim surrounded by pearls legend:
MON•AUE/REA CIVITAT.GEDANENS•1677

Reverse: along the pearl edge a royal bust in a laurel wreath with 8 leaves, with a triple tied, in a mantle and armor, with a visible fragment of a gargoyle on the epaulette and 5 stripes from a caracen epaulette, along the inner edge a legend:
IOAN•III D.G•REX POL•M•D•L•R•P 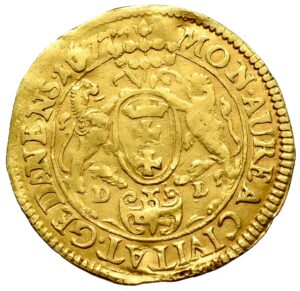 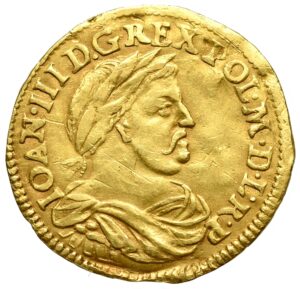