At our Auction 7 – collection of silver coins

Published by rzeszowskidom on April 5, 2021

There are 6 days left until the VII auction, so it’s time to present the Silver Coins Collection from the upcoming event! It is a set of coins of the Second Polish Republic in states 1-3, but it includes, among others, a set of Nike, Harvesters, Piłsudski and Polonia. As the name suggests, the collection concerns silver coins, while grosz coins have not been included in the collection.

At the beginning, it was the rarest circulation coin of the interwar period. A sought-after coin and most often missing from collections – even specialized ones. Of course, I am talking about Nike from 1932, the circulation of which was mostly melted down, and only a few pieces remained in trade and collections. The coin is very rare, even in good condition. The copy from our auction is well preserved, with a brown patina on both sides. In addition, the mirror is properly preserved, especially for this emission.

The second rarest coin is the deep stamped banner. The coin is minted from silver .750, with a legal weight of 18 g and a diameter of 33 mm. The value of PLN 5 was introduced by the reform of January 11, 1924. The coin was minted to commemorate the 100th anniversary of the November Uprising by virtue of the Ordinance of the Minister of the Treasury of November 14, 1930. In circulation until November 1939.
The coin was shallowly stamped in Warsaw in a circulation of 1,000,000, it was the first commemorative coin introduced into circulation in the Second Polish Republic. It is also the only circulation coin from the period of the Second Polish Republic that does not have the issuer’s name: ‘RZECZPOSPOLITA POLSKA’. Chałupski made a R5 rarity for the deep-stamped variant! A shallow stamp will also be available at the auction

Another extremely rare item is 2 zlotys from 1936. The denomination introduced by the reform of January 11, 1924, bits in this pattern from 1934. Pursuant to the regulation of the President of the Republic of Poland of November 5, 1927, these coins could be used to repay liabilities up to the maximum amount of PLN 100. The coin remained in circulation until November 1939, withdrawn by order of the General Government.
The coin was minted at the State Mint in Warsaw in 1934 with a mintage of 10,425,000 and in 1936 with a mintage of only 75,000!
The specimen from the upcoming auction has all the features that prove the unquestionable originality of the above specimen: correctly positioned 6 in the date with a characteristic “tear” and serration with gaps between the notches in the shape of a rectangle.

Rare is also the two zloty note from 1924 with the letter H. The value introduced by the reform of January 11, 1924, minted in the years 1924-1925 at mints in Paris, London, Birmingham and Philadelphia. Pursuant to the Act of January 20, 1924, silver coins could be used to pay off liabilities up to a maximum of 100 zlotys. The coin was in circulation until December 31, 1932, exchanged at the NBP cash desks in the years 1933-1934.
The coins differ depending on the mint in which they are minted. Coins from Paris have the Monnaies de Paris sign – a horn and a torch, and usually have a worse strike. Coins from Birmingham have the letter H under the eagle’s paw, while the eagle itself is clearly thinner than in the case of coins minted in other mints. On the 1924 Philadelphia coins, the obverse and the reverse are inverted by 180 degrees (the so-called reverse); both years of this mint bear no mint marks. London coins have a dot after one year.

As for the five-zloty coins with the image of a woman’s head in a cap, there is the Warsaw five from 1932 with a mint mark.

“Coin rarer than it would appear from the amount of the mintage. As a result of applying too little pressure of the stamp, the highest parts of the relief were lost: the points on the eagle’s crown and the stripes on the ribbon under the clover wreath. This resulted in the decision to melt the vast majority of the mintage […]” – Specialized Catalog of Polish Coins – II Polish Republic and GG 1918-1945 – Jerzy Chałupski

Next, we want to show one of the most-bought coins of the Second Polish Republic – Nike.
As we mentioned earlier, the auction will be complete and in nice condition.
We have attached photos below

Finally, we attach a few selected items, while the entire collection can be viewed on www.rda.onebid.pl 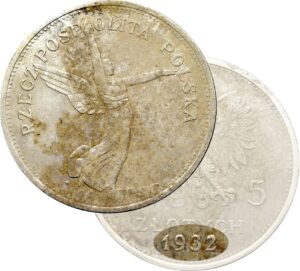 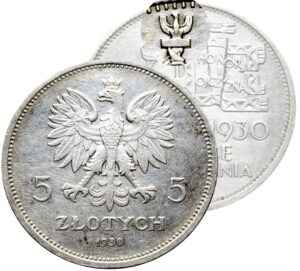 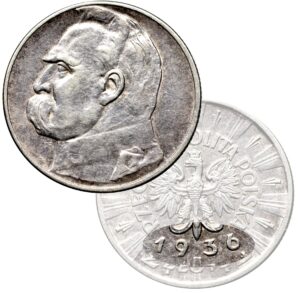 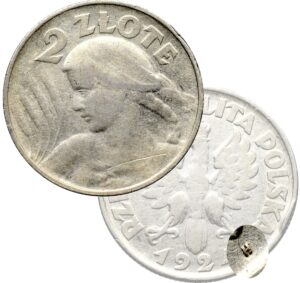 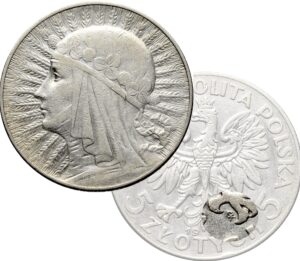 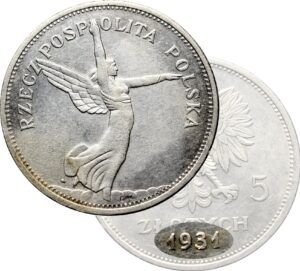 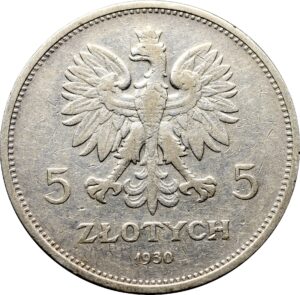 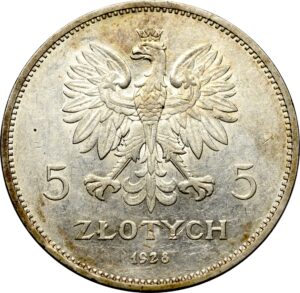 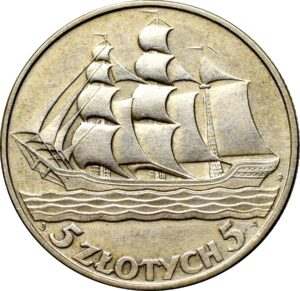 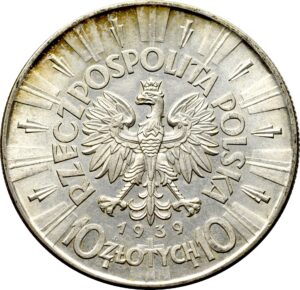 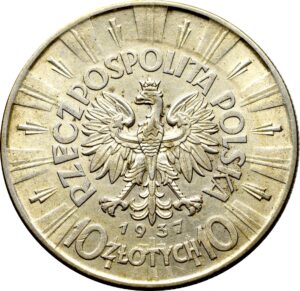 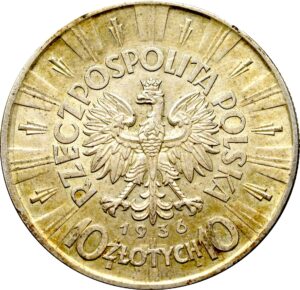 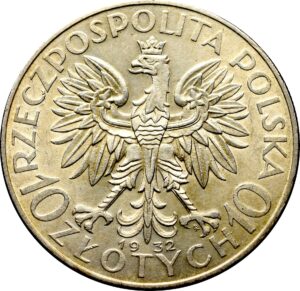