For the weekend, we decided to ask you a question… A question to which the answer seems obvious, but in our opinion it is not

Today, the main role is played by a popular coin, but we have not yet had the opportunity to offer such a perfectly preserved copy with such a great presence. Coming back to the heart, we are very curious what do you think – the offered unit will sell higher than the last one in the MS65, but will it not achieve this result?

The coin is almost perfect, if not for one scratch and a strike on the obverse. For some people it is an advantage, for some it is a disadvantage – because of the way of storage, without any movement on the pallet, a flag with one-sided patina.

Reverse: A banner fluttering in the wind on a long pole topped with a flag eagle, with the inscription HONOR / I / HOMELAND in three lines, under the banner, a horizontal inscription in four lines: 1830 – 1930 / W SETNA / YEAR – NOTHING / POW – STANIA separated by a banner pole. A border with dashes, on the bottom left the coat of arms of Kościesza – the mark of the State Mint in Warsaw, on both sides of the shaft, the initials of the designer Wojciech Jastrzębowski – W – J.

Nominał wprowadzony reformą z 11 stycznia 1924 roku. Moneta bita dla uczczenia 100 rocznicy wybuchu Powstania Listopadowego na mocy rozporządzenia Ministra Skarbu
z 14 listopada 1930 roku. Pozostająca w obiegu do listopada 1939 roku.
The value was introduced by the reform of January 11, 1924. The coin was minted to commemorate the 100th anniversary of the November Uprising under the regulation of the Minister of the Treasury of November 14, 1930. Circulation until November 1939. The coin was minted in Warsaw in a circulation of 1,000,000, it was the first commemorative coin introduced into circulation in the Second Polish Republic. It is also the only circulation coin from the period of the Second Polish Republic that does not have the issuer’s name:
‘RZECZPOSPOLITA POLSKA’. 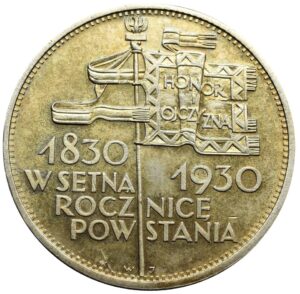 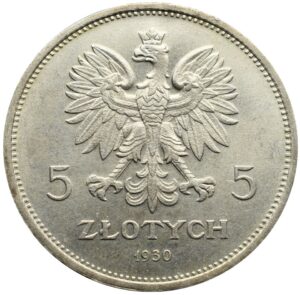 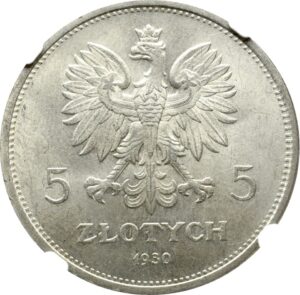 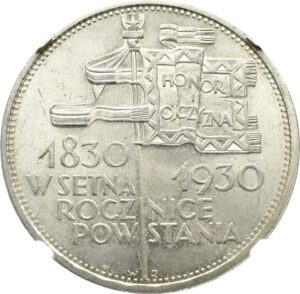