Promised second character Talars are a dream of many collectors, often also those who collect cheaper coins. Undoubtedly, they are very interesting and effective coins, with many representations both on the obverse, the reverse and in the title, additionally they are coins of large diameter and weight. Jokingly called by some collectors a coin for people who lose their eyesight and need larger coins to collect, where you can see more. How interesting these coins are can be shown in the description of the obverse and reverse, which we have included in the auction description.

Obverse: along the pearl edge, a royal torso with a four-bow crown, fleurons in the shape of crosses, 5 jewels in the shape of crosses in an open rim, with 10 jewels on the bows, a mesh cap, topped with a royal apple; in a tubular ruff and armor, with a sash, armor with 7 crosses in the wing, with two rows of balls and a row of crosses in the shoulder plate, with the Order of the Golden Fleece suspended on a chain with 3 flints; holding a royal apple with two strips of cross-shaped gems in a 4 x 3 arrangement and a sword; right; along the outer rim, a legend separated by the coat of arms of Półkozic in a simple coat of arms:
+SIGIS(mundus)•III•D(ei):G(ratia)•REX•POLO(niae)-M(agnus)•D(ux):LIT(huanie)•RVS(siae)•PRV(ssiae)•MA(soviae)+

Reverse: crowned with a pearl ring, with a four-bow crown, with 5 cross-shaped fleurons, between which there are additional cross-shaped gems, with 9 cross-shaped gems in an open rim; a nine-field shield with the coats of arms of the Crown, Grand Duchy of Lithuania, Sweden, Folkungów and the coat of arms of the Sheaf of the Vasa dynasty, with labras on the sides, surrounded by a chain of 11 flints, with the Order of the Golden Fleece; Jacob Jacobson’s initials I-I and the date 16-28 between the shield and the chain; along the outer rim a legend separated by the Order:
SAM(ogitiae)•LIV(oniaeque)•NEC•NO:SVE(corum)-GOT(horum).VA(n)D(alorum):Q(ue)•H(ae)R(ed)I(tarius)•REX+

As we can see from the descriptions, there are many details, and many of them have meanings for those unfamiliar with coins, titles and iconography, which is a good material for research.

For collectors of the threefold, there will be a threefold from the mint in Lublin in 1597, an extremely rare variety that we did not find in public auction archives. In line with the catalog makers’ rarity R6. Characteristic features of this variety are on the reverse the face value under the Snop coat of arms and the Podskarbi coat of arms without the coat of arms, and on the reverse there is a type 10 bust acc. D. Marzęty, also used in 1596.

The delicious Lublin triple from 1598 will also be available for purchase on Sunday. Coin not described by Iger, variant with a dot after GROS. Variety with the mint initial on the left side of the Lewart coat of arms, with a bust of type 38 according to the typology of D. Marzęty. A spectacular specimen appreciated with the MS65 rating in NGC.

3 cover sheets are not very popular, but also very interesting. They find great interest in near-phenomenal states of preservation, which means that they reach prices relatively for a small coin. The specimen from our offer is not only in excellent condition, but also a rare specimen with the Sas coat of arms. Despite the local, delicate mismatch, the specimen has a beautiful mint shine.

A group of beautiful półtoraks was also auctioned, including the Bydgoszcz 1618 with the Sas coat of arms in the Polish type shield, with SIGIS in the obverse legend in the MS64 note, and Vilnius from 1619. A very rare coin from the first year of minting “półtoraks” in Vilnius. Variation with the Wadwicz coat of arms at the end of the obverse legend and MAGNI in the reverse legend. The coin was appreciated by the highest score in the NGC MS64 grading among the so far issued. A specimen worth including in a good collection of Polish półtorak.

Staying at the Vilnius Mint, it is worth paying attention to the threefold with the Korczak coat of arms of Podskarbi Maciej Wojna, between a bust and a legend. A very rare, typologically sought-after item, a variety that was assessed by catalog authors as the rarity level R5, by Tyszkiewicz at 25 Marks (where the popular Sigismund III thalers were valued at 6 Marks), and by Ivanuskas as a rarity RRR. A very nice specimen with minor mint flaws in the obverse sheet, which resulted in the absence of Snop on the reverse. A well-preserved mint gloss in the background, dimmed by the patina of an old harvest.

For dessert, a penny from 1615 with the minting flaws typical of this issue, despite which the specimen has a very nice appearance, thanks to its exquisite gloss and delicate patina. The copy appreciated with the MS64 (MAX) note

Some time ago we discussed the Bydgoszcz ortas, but we did not have the opportunity to focus on the Gdańsk orts, and we have a lot of them on offer, and a lot of nice and interesting copies!

A very rare and sought after orth from the second year of minting them in Gdańsk from 1609, a coin rarely found on the auction market, a coin sought in any state of preservation due to its lack in many, even very advanced, collections – in our nice, 2nd condition behavior.

There will also be an orth from the last vintage of minting with the old type of bust with the image of the king in a tubular ruff. A characteristic variant without dots at the cross crowning the cartouche with the city’s coat of arms in a state of preservation, which can be seen in the video below

Undoubtedly, one of the typologically most interesting and at the same time the rarest ortho from 1623 is the copy with the date on the rim. Variation with the date only on the rim, highly appreciated by the authors of catalogs (from R5 to R8) and price lists (Tyszkiewicz valued it at 25 Marks with a question mark, where many Gdańsk ducats of this ruler are valued at a dozen or so Marks). The pre-auction shows interest in the coin, the starting price of 5,000 was quickly outbid and is currently already PLN 7,000.

Of course, these are not all ortas we offer, but if someone wants to see all the pieces on offer, it is worth taking a look at www.rda.onebid.pl

The last coin we want to present today is the one we wrote about some time ago. The golden kopeck without the date of Władysław IV Vasa, son of Zygmunt, was minted in Moscow. The issue of the coin was in the years 1610-1612 when Władysław was sitting on the throne as Tsar of Russia in the Kremlin. According to B. Jachimczyk, kopecks minted in gold fulfilled their separate role in circulation – as payment of pay for mercenary troops. The characteristic shape of Russian kopecks struck up to Peter I, resulting from the minting of coins from a cut metal bar in the shape of a long wire, has made it popular today as “tears”. In turn, the frequent illegibility of large parts of these coins results from the disks that are too small for the stamps.

On the obverse we can observe a rider on a horse (identified with the ruler) riding to the right, holding a spear pointing to the ground, and on the reverse there is a legend in 6 lines in Old Russian:
[Ц]РЬI В[ЕЛ]/IКIИ КНѦ[SЬ]/ВЛАДIСЛ[АВЪ]/ЖIГИМО[НТ/ОВИЧЬВСЕЯ/РУСИ] 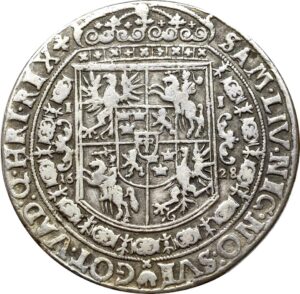 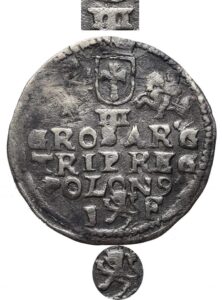 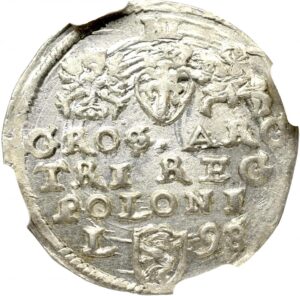 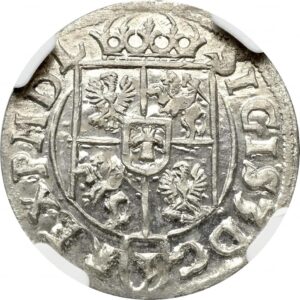 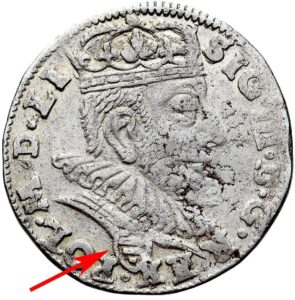 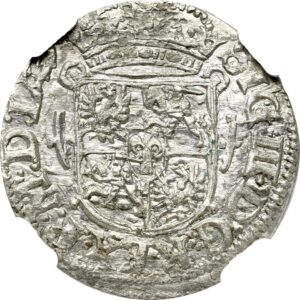 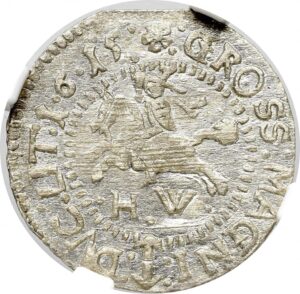 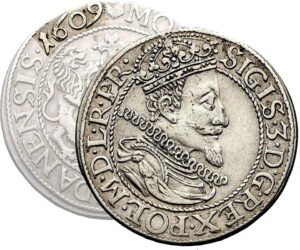 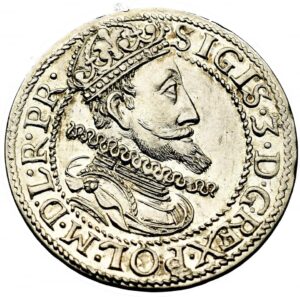 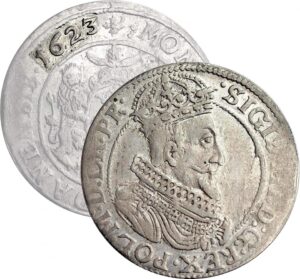 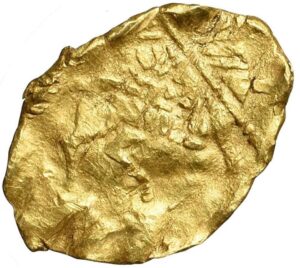