We decided to spend Friday just before the end of work on the catalog, contemplating the unique item.

An item that is extremely rare on the market.

Nicholas II commemorative ruble for the 200th anniversary of the Battle of Gangut at our 6th auction!

Admission to the service of the battleship was to be a huge holiday, but due to the outbreak
of World War I, the unit was accepted into service without major celebrations (the unit itself served in the Russian and then the Soviet fleet until the 1950s, receiving the name of the October Revolution, which additionally constituted distinction for this unit).

Nevertheless, due to the minting of the coins prepared for the great celebration of the 200th anniversary of the great victory of the imperial fleet under the Hanko peninsula, commemorative rubles were released into circulation in a circulation of 30,000 copies.
Then, in 1916, on the order of Grand Duke Sergei Mikhailovich, a coin was minted in the mint in a mintage of 300 copies – 50 for the Prince, 85 for the staff of the fleet and 165 for the tsarist court. The vast majority of the minted pieces have been remelted, which defines the coin as a real rarity.

The senior medalist of the Saint Petersburg Mint, Piotr Stadnickij, was responsible for the design of the coin. This colorful figure of the artist-sculptor and the long-time medalist of the
St. Petersburg Mint seemed to be a guarantee of an exquisite design that captivates with its deliberate simplicity compared to other commemorative rubles. However, it was the artist’s last work for the mint. Already in that year (1914) he stopped working on important projects. Interestingly, there are no artist’s markings on the coin itself, and only on the rim are the initials of the Petrograd mint master, Wiktor Smirnov, who held his office in 1912-1917.

The design of the coin itself clearly stands out from other commemorative issues of Nicholas II, emphasizing its character by simple, yet beautifully embossed symbolism – e.g. by marking on the obverse of cards with waves as a symbolic reference to the naval power of the Empire, which by commemorating the first victory of the tsarist fleet emphasized its superpower character, or by placing the bust of Peter I in a laurel wreath – a symbol of victory.

Obverse: Eagle of the Empire stylized as the coat of arms from the period of Peter I, holding in its claws and beaks four cards with waves symbolizing the four seas to which Russia had access (White, Baltic, Black and Pacific Ocean), below the inscription:
МОНЕТА РУБЛЬ;

Reverse: a bust of Piotr I, antiquated in scale armor, with a mantle fastened with a rosette jewel, in a laurel wreath, facing right, an inscription around the outer rim:
ГАНГУТЪ/27 IЮЛЯ-1714 – 1914

A coin missing from most, even highly advanced collections, sporadically listed at the world’s largest auctions, on the Polish market only three quotations over the last several decades. 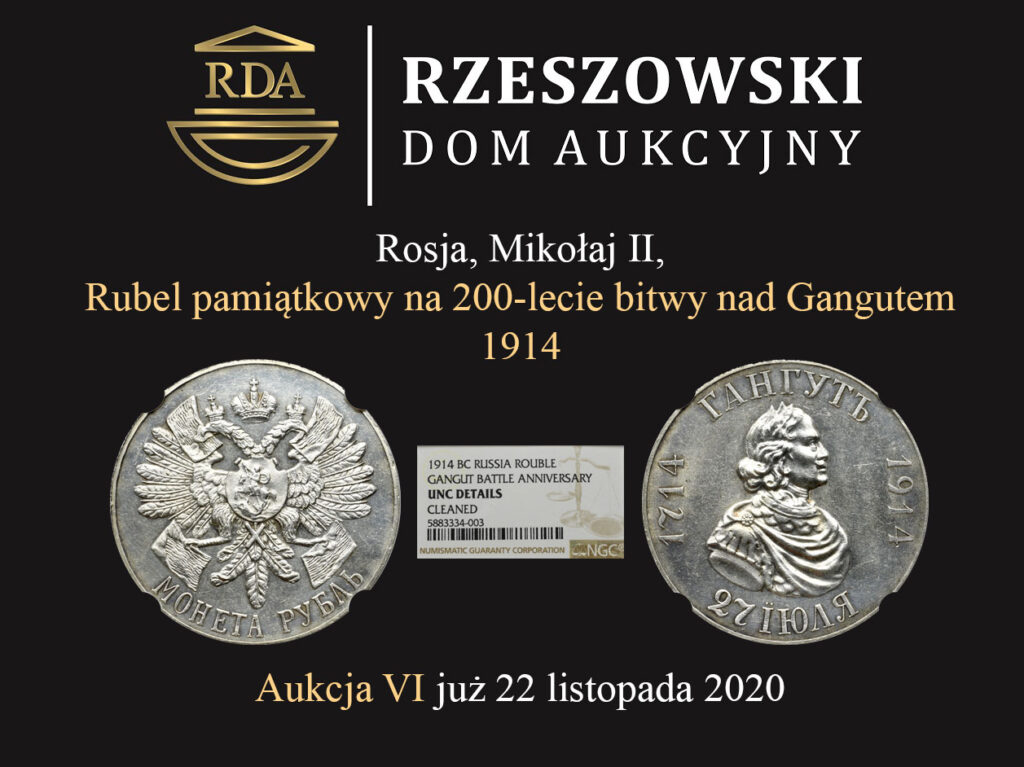 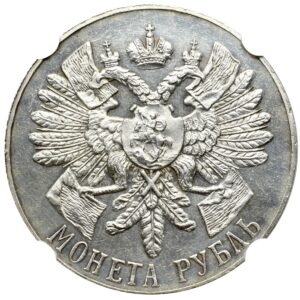 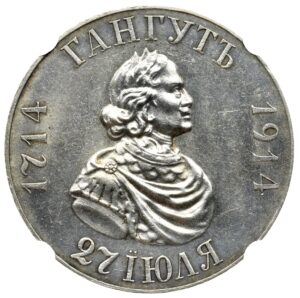