Published by rzeszowskidom on October 18, 2020

It’s time to start your adventure with the main auction!

For starters, an exquisite specimen of the extremely rare Bydgoszcz ort.

Due to the shortness of the beating, this emission today belongs to one of the rarest orts of Jan Kazimierz, regardless of the variety. It is also highly rated by the creators of catalogs (Kopicki R4, Kamiński-Kurpiewski R5), and also very highly valued at Tyszkiewicz, for 24 marks, where Gdańsk thalers of this ruler in popular varieties were priced at 7 marks.

Its rarity is also confirmed by occasional quotes on the auction market!

Obverse: a royal bust in a laurel wreath and armor, with a protruding lace collar, the Order of the Golden Fleece hung on the chest, legend along the rim:
IOAN CAS•D:G:P-OL•& SVE:REX•;

Reverse: a crowned, five-field escutcheon with the coats of arms of the Crown, the Grand Duchy of Lithuania and the coat of arms of the Sheaf of the Vasa dynasty, below the coat of arms of Wieniaw Podskarbi Wielki the Crown Bogusław Leszczyński, on the sides of the shield, the face value 2-1 and the initials of the Bydgoszcz mint manager Krzysztof Guttman – CG, legend along the rim:
CIVITAT:BIDG-OSTIENS:1651;

A coin missing from most collections, definitely worth recommending to any collector of Jan II Kazimierz coins.

Slight defect and minor sheet metal defects typical of coins minted at that time in Bydgoszcz. Delicate mint shine with an age-old patina.

If you want to fill your eyes with this coin, we invite you to watch a short video at the address https://youtu.be/7pOf_KA_5SI 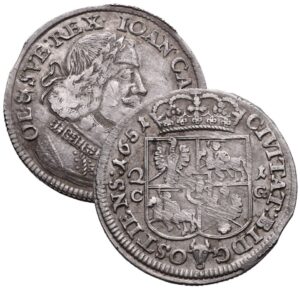 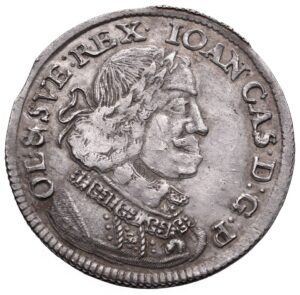 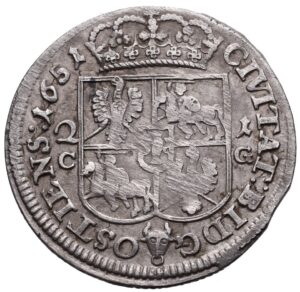