Published by rzeszowskidom on October 21, 2020

For Monday, we have prepared a small, theoretically popular coin for you, but the specimen we offer, due to its state of preservation, becomes a very rare coin

By the way, we have a question if you were aware that during the Second Polish Republic, a large part of the staff of the state mint were women who were not only sorting, dividing and packing, but also working with mint machines?

And back to the core, a few words about today’s star and the whole series of “Friday with the marshal”…

An exquisite mint copy. A very rare coin in this condition (despite paradoxically the highest mintage among Fives), as evidenced by the fact that even in the NGC populations it is the least frequently graded year of 5 zlotys with the image of the Marshal, and at the same time with the lowest number of coins with MS notes. This copy appreciated the highest rating of the NGC so far, with a “+” indicating minimal deficiencies in relation to the MS65 rating, which has not yet been received by NGC from any copy of this year.
The presented five comes from the first year of coins designed by Stanisław Ostrowski.
The face value introduced by the reform of January 11, 1924, bits in this pattern from 1934.
In accordance with the ordinance of the President of the Republic of Poland of August 27, 1932, these coins could be used to repay liabilities up to a maximum of 500 zlotys. Coin in circulation until November 1939, withdrawn under GG regulation.
The coin was minted in Warsaw, the lowest mintage in 1938 (289,400 pieces). Highest in 1934, however, the exact amount is unknown. The reports of the State Mint stated only that 7,060,000 pieces of three types of five zlotys were minted in 1934, with no information on how many pieces were for each type.
Coin minted in silver .750, diameter 28 mm and legal weight 11 g.
Obverse: state eagle of the design from 1927 against the background of rays, in the rim the inscription:
RZECZPOSPOLITA POLSKA 5 ZŁOTYCH 5, a year under the eagle’s tail.
Reverse: a bust of marshal Piłsudski facing left, in front of it the Kościesza coat of arms – the mark of the State Mint in Warsaw. Designer’s signature on the shoulder:
St Ostrowski.
Rim: serrated

In the coming days we will bring you closer and present you a few more items from the period of the Second Polish Republic, i.e. a section that is very crowded at our autumn event 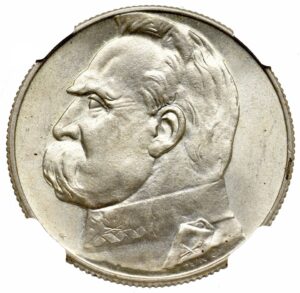 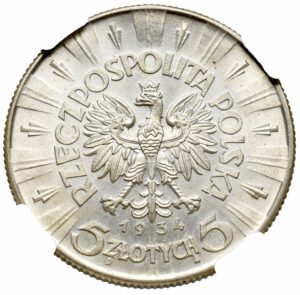 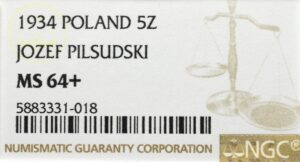 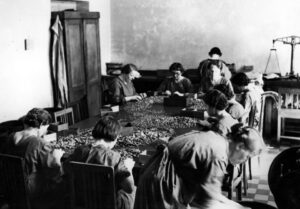 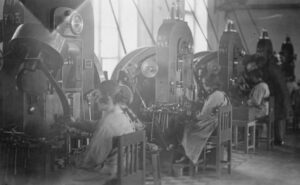