At our Auction 7 – golden ducat of Sigismund III Vasa

In order for the tradition to be fulfilled, we invite you to travel back in time today at noon.
We will go back 428 years to 1593. The year of the great internal triumph of the Republic of Poland.

It was this year that the first Cossack Uprising, known today as the Kosiński Uprising,
named after Hetman Krzysztof Kosiński, was suppressed. The first in a series of Cossack uprisings that plagued the Republic of Poland in the following decades.

We are pleased to present you the city ducat, minted at the mint in Gdańsk in 1593!

A very nice specimen of a rare vintage, only occasionally listed on the market, especially in such a good condition!

Formerly a variant described as with an inverted letter C, however, on the basis of this specimen, we can conclude that it is a broken stamp on the letter D, which is quite a curiosity and a rarity, taking into account the emphasis on the quality of minting these representative coins and immediate elimination or correction of any defects.

Characteristic for this variety is the bust with a mascaron on the shoulder. This decorative collarbone of the armor was one of the most recognizable elements of the parade half-armor and Polish karacens, here, due to the visible fringes, we are dealing here with the first of the mentioned types.

Obverse: along the pearl edge a cartouche with the city coat of arms supported by lions,
above it is a tied monogram of the PK of the manager of the Gdańsk Mint in 1582-1608 -Filip Klüwer, along the outer edge is a legend beginning with the mint mark:
MONE•NO•AVR•CIVI:GEDANENSIS 93;

Reverse: along the pearl edge a royal bust with a crown, armor and a tubular ruff,
with a mascaron on the arm, facing right, along the outer edge a legend:
•SIGISMVND•III-•D:G:REX•POL•D:PRVS;

In our opinion, the coin is worth recommending to any, even the best collection.

This beautiful copy will change its owner in April and it will not be the only ducat of Sigismund at our Auction! 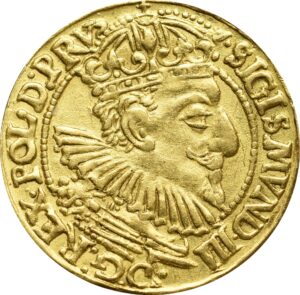 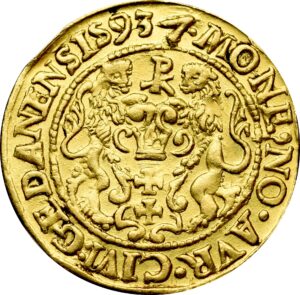