At our Auction 7 – coins of Jan III Sobieski

Published by rzeszowskidom on April 5, 2021

The coins of Jan III Sobieski are gaining in popularity every year, thanks to which we have the opportunity to observe more and more beautiful coins of this ruler at auctions. The 7th auction will feature an excellent Kraków szóstak coin from 1681, characterized by great detail and
a beautiful mint gloss.

Obverse: royal bust in a laurel wreath with a double bond, in armor with 5 buttons in one row on the shoulder plate and a mascaron on the breastplate, to the right, under the bust, the initials T.L.B. of Tytus Liwiusz Boratini, legend along the rim:
IOAN III D•G•REX POL•M D•L•R•P•

Reverse: crowned with a four-bow crown with five rosette fleurons, with 4 jewels in a rim with 12 jewels on bows, a three-field coat of arms, with the coats of arms of the Crown, the Grand Duchy of Lithuania and the family coat of arms Sobieski – Janina without ornaments; under the crown, the face value VI, under the shield, the date 16-81; along the rim, a legend separated by the Leliwa coat of arms in an oval coat of arms:
GROS•ARG•SEX-REG•POLONIAE

Another item that is worth paying attention to is a relatively nice szóstak from 1684 with the initials SP – Spytek Pstrokoński under the bust, who was the manager of the Bydgoszcz mint at that time.

Reverse: crowned with a four-lobed crown with five rosette fleurons, with 4 jewels in the rim and numerous jewels on the bows, coats of arms of the Polish type with the coats of arms of the Crown and the Grand Duchy of Lithuania and the Sobieski family coat of arms – Janina. Under the crown, the face value is VI, under the shields, the date 16-84. On the rim, there is a legend separated by the Jelita coat of arms of the Treasurer Jan Morsztyn in an oval coat of arms:
GROS ARG SEX-REG•POLONIAE

At the end of this ruler’s silver coins, we want to show an ort coin from 1677 with Santi de Urbani Bani’s initials under the denomination, with an offset in the legend on the reverse.
A variant with a slightly curved coat of arms, an attractive, well-preserved specimen with
a double-sided patina that is pleasant to the eye.

Obverse: a bust of Jan III Sobieski in a laurel wreath, armor with 6 stripes, a cloak fastened with a jewel, with an order cross on the chest, a legend along the rim:
IOAN•III D.G•REX POL.M•D•L•R•PR•

Reverse: crowned, with a four-bow crown, with 5 fleurons and 6 jewels in an open rim,
a five-field coat of arms with the coats of arms of the Crown, the Grand Duchy of Lithuania and the coat of arms of the family Sobieski – Janina. On the sides of the shield, the face value 1-8 and the initials S-B, along the rim is a legend separated by the Leliwa coat of arms:
MON•NOVA AO/RG-REG•POLON•1677

Finally, we would like to remind you that the Gdańsk ducat from 1677 will also appear.
A circulating copy of the second year of ducats minted in Gdańsk during the reign of
Jan III Sobieski. A characteristic issue from the mint under the direction of Daniel Lesse,
with a portrait of the king in a mantle and a laurel wreath, and in a caracen, with stamps also used in 1682. Interestingly, on the obverse stamp, the engraver originally made a mistake in the legend in the word AUREA, where he mistakenly omitted the letter R, under which E is visible.

We invite you to www.rda.onebid.pl 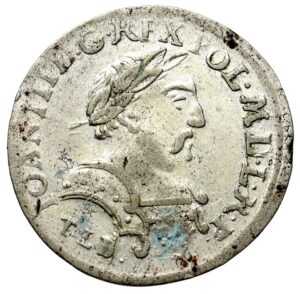 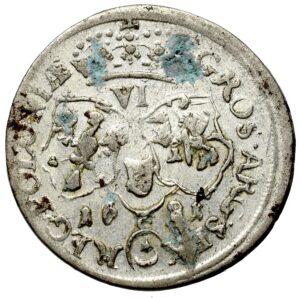 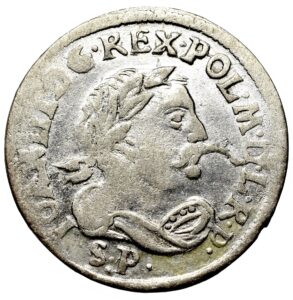 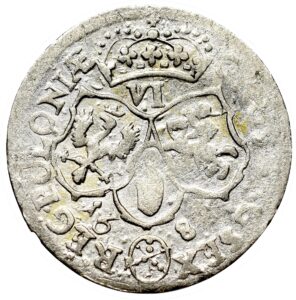 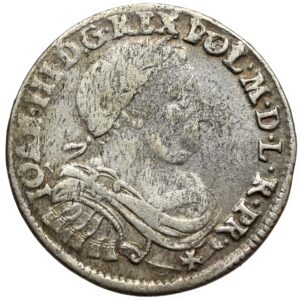 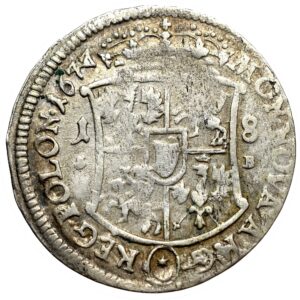 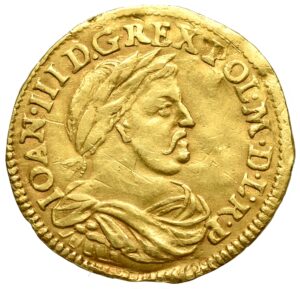 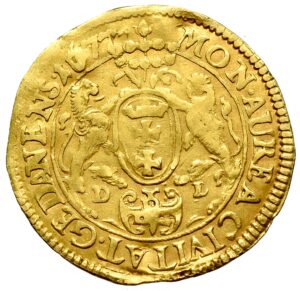