At our 6th Auction – golden ducat

Outside the window it is gray and gloomy, so we have nothing else to do but brighten your aura with something yellow, and at the same time smuggle an advertisement for the upcoming event, where this specimen will change its current owner

A beautiful item with exquisite detail, with a mint gloss very well preserved.

Minor cuts typical of gold coins, which – as they were minted from softer metal – were more often bent, bruised, scratched, etc.

Less common on the market for the annual municipal issue.

Variation with full REX notation on the reverse.

Obverse: along the rim edge the crowned coat of arms of Gdańsk in an oval cartouche, supported by two lions resting their paws on the cartouche base; Cartouche topped
with a wreath with a twig breaking the edge; Between the paws of lions, initials D-L of the lessee, Daniel Lesse, the lessee of the Gdańsk mint in the years 1650-1685; along the outer rim the legend:
MON(eta)•AUREA CIVITAT(is)•GEDANENS(is)•1661;

Reverse: along a string edge, crowned, with a four-bow crown with 5 rosette fleurons, with 4 jewels in the rim, royal bust in armor, with two visible armor sleeve plates, in a coat, with the Order of the Golden Fleece on a chain with 4 flints, with a visible lace collar , right; along the outer rim:
IOH(annes)•CAS(imirus)•D(ei)•G(ratia) REX POL(oniae)•& SUEC(iae) M(agnus) D(ux) L(ithuaniae) R(ussie) P(russiae);

We cordially invite you on November 22 to www.RDA.onebid.pl 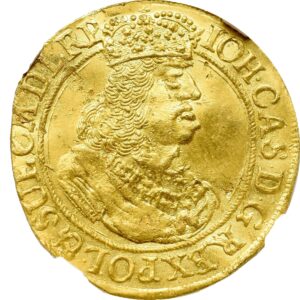 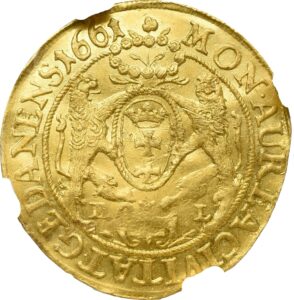 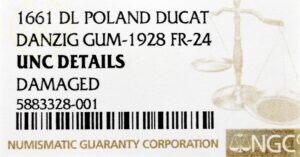